The London Training Consortium (College) Story
In 2005 Phoenix Community Care formed a new company called London Training Consortium.  The reason we formed the company was due to misinformation from an accountant.  We were told that we needed  to take this action in order to register for VAT purposes,  in the end  turned out to be incorrect, but by this time, the company was already up and running.
PCC was already addressing some of the needs of the young people for example, looking after unaccompanied minors, foster children, vulnerable adults and young people who had been through the care system and were moving on to independence.
We quickly understood that many of those we were seeking to help needed to be able to speak English to progress in the UK and so English Speaking for Other Languages (ESOL) classes were born.  During the seven years since the inception of the London Training Consortium (LTC) we have seen many young people helped by these classes.
We have run the classes and somehow found the money to pay the staff, although most of the time I have no idea how, (probably God knows).  At other times we were fortunate enough to receive grants from the European Social Fund via the London Development agencies.  Each year we  wonder how we will  find money to train  the next batch of students.
In spite of the challenge of ongoing funding, the college has expanded its services and now helps those young people, who the government euphemistically calls NEET (Not in Education Employment or Training).  We have helped many to access further education, enter into employment, and often most importantly, change their attitude to life, success and progress.  I remember the whole office applauding one young man on achieving his Oxford Cambridge Royal Society of Arts (OCR) certification in Literacy and Numeracy; which is equivalent to a General Certificate of Secondary Education (GCSE).  He was full of delight by the fruits of his hard work.
LTC is registered as an examining body for various courses leading to qualifications such as OCR, ASDAN, City and Guilds and ICCE, and there is an enduring thrill observing young people, who thought they could never achieve such qualifications, smile confidently as they receive their certificates.
We are still talking to the people who offer grants, and filling in their application forms.  Each year, in excess of fifty students undertake the various courses offered by LTC.  The courses are tailored to get the best for the individual concerned.  I don’t know about you but I am fascinated by statistics and thought perhaps you would like to see some, and even if you don’t,  I am going to show you them anyway.
First of all  here are  the various nationalities that have gone through our college, it reads a bit like United Nations doesn’t it?  The interesting thing is;  you can often tell where the wars are by looking at our statistics:
Here are all the qualifications that the students gained.  Almost all students leave  LTC with some certification. 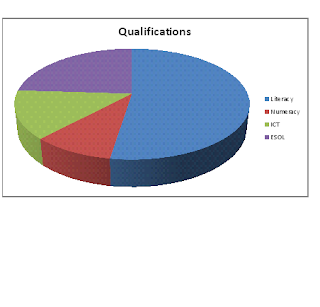 Finally we seem to be more than just a training college, helping many of the students to fill in forms, find housing, offering help and support with the many challenges that life brings.   Many of the students are without family or relatives to help them with these issues.  As one staff member commented recently, “ I often feel less like their tutor and more like their Mother,” she went on to say,  “what most of these young people are looking for, what they really need to progress is  someone to sit and listen to them.”  And that’s what we do; it’s called going the extra mile.  The reward for us is their success.
One of the most special elements of being involved in LTC is that some young people who commenced as students ended up as long term friends.
Adrian Hawkes
For Adrian Blog spot
W. 735
Edit: Technicolour Text