Many years ago, when my children were only 7 and 8 years old; talking about coincidences was in vogue, it seemed that every other conversation was about this subject.   Then, as now, I would find that my coincidences’ seemed to come in answer to prayer.  With both these elements in mind, I thought I would tell you a true story.

I am also reminded of when I lived in the North of England,  a  14 year old would constantly come and talk to me about eternal things.  He was puzzled and sometimes annoyed with my answers, particularly any that involved prayer and its results.  One day he knocked on my door at 36 Wilton Way, when  I answered the door and he looked at me with great confidence, he said he had dropped in on his way home from school and had been thinking all day about my so called answers to prayer, ‘so called’ is how young  ‘Langys’ described it.   I smiled at his enthusiasm as I looked at him though the open door, observing his obvious new found confidence.  I said, ‘oh and what is the answer then?’  He said with delight, “they’re just coincidences!” “Well,” I said, “thank you for that, but it seems funny to me that when I pray I get a coincidence, which seems like an answer to prayer to me.”

Now I am sure that there is a much more complex discussion needed than what I said to that 14 year old, however, there isn’t the space here.  But I have tried in other places to discuss this further,  what I really wanted to do this time is to just tell you one of those coincidence stories, and let you make up your own mind.

As I was saying, this is a story about my  two young children aged 7 and 8; I had signed a form to say that they could go on a school trip, the terrible thing was that today was the day I had to send the money with the children to the school.  It was breakfast time, and  both girls where looking into my face imploring  me for  £5.00 each for the school trip.  This was £10.00 which I genuinely did not have and did not know where to find it from; I was regretting that I had signed the form in the distant hope that by the time came to pay the money I would have the required tenner!  It hadn’t materialised.  What was worse,  I now had two strident little girls nagging at me, demanding to know  what I was going to do about it, and they, let me tell you, were worse than facing the school authorities  or the teacher.

I tried some suggestions, how about if I came and talked to the teacher.  They remonstrated with me; that, apparently was far too embarrassing, everyone else, so they said, had already paid!  “I tell you what,” I said humbly, “I will come and see the school secretary, perhaps I can pay a little off each week.”  That, it seemed, to the two little girls, was an even worse idea, loud cries of, “oh Dad how could you!”  Where echoing throughout our breakfast time.

Breakfast now over, and the time for them to leave for school had arrived.  We stood ready to go, with the girls still firing off angry comments at me. I interrupted them as they stood there, angry and forlorn, coats and scarves on, school bags on their shoulders, faced with telling the teacher they had no money and could not go on the trip.   I said, “Why don’t we stop right now, pray and ask God to do something as I really don’t know what else to do as you obviously don’t like my suggestions.”  They reluctantly agreed.  We bowed our heads and I explained to the Father that I did not have £10.00 even though I had said I would pay £10.00 for the children’s school trip, and I said, “I don’t know what to do for my children, so will you please, please help me!”  I think you can see that my prayer was heartfelt, whatever the children’s position was.

So that the discussion did not re-start, I immediately said, “Okay let’s get to school!”  I opened our kitchen door to walk through our side entrance to our front door.  We still live in the same house and it’s a bit strange in that we have two front doors, the main door is accessed through a corridor. When it’s blustery, this corridor turns into a wind tunnel.  It was one of those windy November days, and as I opened the door a gush of powerful wind blew in, bringing with it all the leaves of the neighbourhood. I didn’t go out, instead I  moved the children back out of the way and asked my wife for a dust pan and brush, deciding I needed to get this mess cleared  up before I taking the children to  school.  I began sweeping up the leaves, and to my amazement, and I have to say wonderment, in the middle of the great pile of leaves was a ten pound note, swept in by the wind with the leaves.

The children were impressed, I was Impressed we stopped and said, “thank you Lord!”  I don’t know if someone lost it, or if it was a special delivery from God, however it seemed to me a very, very immediate answer to prayer. Needless to say, they went on the school trip. 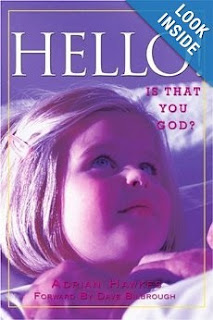 Well I don’t know how well my children remember that happening all those years ago, but what is your take on the story, another coincidence or does God answer prayer?