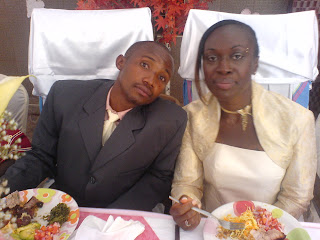 I was at a wedding recently in Kenya, two men came up to me, old friends of mine, they said “Hi,” and then asked me if I had realised that I had been coming to Kenya for 11 years. I hadn’t realised. They reminded me of the first time we met which was on my first visit to Kenya 11 years previous. I remember and laughed, they had turned up to a seminar that I was running but one that people needed to have pre booked for, they hadn’t done so, because they didn’t know it was on. We made special arrangements to include them anyway.

The two guys went on to say do you realise that 11years ago you changed our lives. I laughed, well it did sound a little over the top I thought. They said to me “you don’t understand do you”, I admitted that I didn’t quite think I was on the same wave length.

These two friends of mine went on to explain that by coming to what I had been doing 11years previously this had changed their thinking and because of their changed thinking they had changed their actions and because of changed action they had gone back to their village and the village had changed, and because the village had changed they where able to help the village next to them to change. I felt very humbled, realising that actually what had happened was that I had been able to be a catalyst or conduit introducing many others to these friends who had provide water, business enterprise, opportunities that had ultimately changed the way that their village worked for the better, providing water storage, education, and greater food security, and a different way of thinking.

Most of us, like me underestimate the power of influence. Yet actually that is often the most valuable thing that we can contribute to this world. At least we could be a good influencer, persuader and world changer or we could be a bad one.

The thing about good persuading, is not just the words but the ‘who you are’ do your words match your actions, are you acting with integrity, does the way you speak, influence, persuade match the medium that you use to do it.

It was Marshall McLuhan in the 60’s who coined the phrase ‘The medium is the message’ meaning that the form of a medium imbeds itself in the message, creating a symbiotic relationship by which the medium influences how the message is perceived, creating subtle change over time. The phrase was introduced in his most widely known book, Understanding Media: The Extensions of Man, published in 1964. McLuhan proposes that media themselves, not the content they carry, should be the focus of study; he said that a medium affects the society in which it plays a role not only by the content delivered over the medium, but by the characteristics of the medium itself. Winipeg the free online Encyclopedia

So what does that mean in practise? Well in real terms if I say believe the Bible when it instructs us to love strangers amongst us, but then I were to constantly quote Daily Male articles that tell people that Asylum Seekers and refugees are really crooks and scroungers, what is happening is that my actions drowned out my words and the message conveyed is the Daily Mail one and certainly not the Bible one.

Again in Kenya, a young man came to me one day after I had delivered a talk in a church meeting and asked me “are you telling me that you can be a Christian and not have to wear a suit”. I looked surprised as this had nothing to do with what I had been talking about. Being my usual causal self I had turned up in blue jeans and a tee shirt to do this particular talk, and had not really consider my bad dress sense. I thought the question was some sort of joke but then looking around I realised that all the men where in suits. I am sure no one had told him to wear a suit to be a Christian but the medium of church there made sure that one conformed to this particularly social requirement, unless you are insensitive like me!

I have often had discussions with people concerning style, style or the way of being or doing things can often be interpreted as our medium. So the way of ‘doing’ church our preferred style becomes the medium by which things are expressed. So for example when we invest large amounts of money into an ornate building which we say is for worship of God, what we are really saying is that the building is more important than people are, and it does not matter how much we say that of course people are more important the medium tells the story, makes the point!

Like wise the style / medium of our meeting will often give messages and tell stories that we sometimes is different to our words. We could for example talk about relationships being very important but the medium / style of our coming together will convey totally the opposite, especially if we have everyone sitting in rows looking at the back of the neck of the person in front, very un- relational!

So persuading and influencing is very important, and we are all doing it all the time and sometimes the medium we use will be saying the opposite to what we say we believe. We are all aware of the way things are said as well as what is said. The medium is the message!

In the best possible way the Good News of Jesus is to be conveyed in the best possible way, the medium is the message. God does it by incarnation or in Bible words from John 1:1 and then verse 14 in the New Testament this is from the NIV version: Verse 1. In the beginning was the Word, and the Word was with God, and the Word was God. And then verse 14 The Word became flesh and made his dwelling among us. We have seen his glory, the glory of the One and Only, who came from the Father, full of grace and truth.

What is actually happening here is that God is using words, the words of Jesus but he is incarnation those words so the words become not only words but medium / style, the very message themselves. That is why Jesus is the Word, not just saying the word, and of course that principal is still very much the way the Good news of Jesus should be told, by incarnation, medium, style, words, message all in agreement and not contradictory. That way we can effectively change what needs changing and make a difference for good.

We can do it, we can be incarnated, we can become both message, and medium and with non contradictory style. I guess that means that we do things with integrity. In a recent article I noted that I’m often invited to speak on a subject that I don’t like speaking much on as I think its somewhat of a non starter, but end up talking about it anyway, evolution that is with people like Richard Dawkins, the Teachers Channel, More 4 News and the like. Then again a phone call the other week from a very nice young lady who said she wanted to interview me. I said “oh yes, what about, let me guess for TV and its on evolution.”

“Well” she replied “it is sort of on that subject, but it’s more than just the subject that we have reason to want to interview you”. I asked the obvious, “What channel is it.” Oh it’s not a channel she replied this is a (1).special market research. “Market research on evolution,” I responded incredulously. “Well yes sort of” she replied, “so why me I asked.” “Well because” she said “our company concentrates on the sort of research that eventually produced reports for public use. These reports could be used by anyone, this one is funded by a public theology think tank and we specialise in finding people that we know are thought –leaders, or opinion leaders.”
‘
Well it is nice to be thought of as an opinion leader, or thought leader. Particularly as I know that thinking is the beginning of all action and if we want to change action then we need to change thinking, so do I want to do that, you bet I do!

Influence is a very powerful thing, often time’s people on committees and boards and things say to me not sure what I do hear, I am not as active I just attend. The thing is how much do you persuade, are your plans good, what level is your integrity, do you make things possible for others. Are you a door opener?

In other words how much are you affecting change by just being? By just creating new thoughts new ways of doing and being, being a pioneer being a thought leader and opinion maker in stead of just a follower. Good thinking right thinking out of the box thinking.

You could even be an incarnation style message with the right medium that really makes a difference. Why not?

(1).The research is part of a programme of research commissioned by Theos
The ‘Public Theology’ think tank and funded by the Templeton Foundation,
ESRO has been commissioned as independent researchers to carry out the work.
As with all research that ESRO conducts, we will be adhering strictly
to the ethical guidelines laid down by the
Association of Social Anthropologists (ASA):
http://www.theasa.org/ethics.htm.